India’s large and aspiring middle class of 75 million households or 300 million individuals want products that are value-driven. The country’s 500 million people under the age of 25 have access to more money that has additionally resulted in independence, aspirations and a demand for products. The Indian retail sector accounts for over 20% of the country’s gross domestic product (GDP) and contributes 8% to total employment. The cumulative foreign direct investment (FDI) inflows in single-brand retail trading, during April 2000 to June 2011, stood at 69.26 million USD.   Studies like the MasterCard Worldwide Index of Consumer Confidence have ranked Indian consumers as some of the most confident in the world. The more confident the consumers are about the strength of the economy, their personal finances, their career growth, etc., the more they tend to increase their consumption, purchase non-essential products, experiment with products, brands, categories, etc. Besides, the country’s rural population of 700 million presents an opportunity for retail and consumer companies that cannot be ignored.   The current estimated value of the Indian retail sector is about 500 billion USD and is pegged to reach 1.3 trillion USD by 2020. The penetration level of modern retail (currently 5%) will increase six-fold from the current 27 billion USD to 220 billion USD in 2020. The Indian retail sector is expected to grow at a CAGR of 15 to 20%.   Factors driving the organised retail sector include the following:

The consumer products industry has been growing at a brisk pace in the past few years backed by robust economic growth and rising rural income. Growth drivers such as premiumization, rapid urbanization, evolving consumer lifestyles and emergence of modern trade have shielded the industry from the slowdown. The consumer products or the Fast Moving Consumer goods (FMCG) sector is valued at Rs 1.6 trillion (Source: Nielsen). The industry is urban-centric with 66% share of the goods being consumed by urban India. Metropolitan cities & small towns (population of 1-10 lakh) have been driving the FMCG consumption in urban India since 2002. In fact middle India, comprising of the small towns and consuming 20% of overall FMCG sales, has been growing the fastest across rural and urban segments. As per Nielsen, the FMCG market size of middle India is set to expand from Rs 287 bn in 2010 to over Rs 4 trillion by 2026. Rural India, where 70% of the population resides but only 34% consume FMCG goods, presents the biggest market potential for the industry. Backed by low unit packs and aggressive distribution reach, rural market size has expanded four times to Rs 564 bn since 2002. Companies such as Hindustan Unilever and Dabur which derive nearly half their sales from rural India have been increasing their reach. FMCG goods are retailed through two primary sales channels – General Trade and Modern Trade. General Trade comprising of the ubiquitous kirana stores is the largest sales channel forming 95% of overall retail sales. However, growth of consumer goods retailed through Modern Trade channel is outpacing the growth of FMCG products in General Trade. Factors such as a comfortable and modern store experience, access to a wide variety of categories and brands under a single roof and compelling value-for-money deals are attracting consumers to organized retail in a big way. But modern trade is still an urban phenomenon with 17 key metros contributing to 73% of overall modern trade in India. Product categories such as packaged rice, liquid toilet soaps, floor cleaners, breakfast cereals, air fresheners & mosquito repellent equipment have a higher penetration in modern trade channel. Despite the relatively recent performance of private label products in India, it is already close to 7% of modern trade sales. Modern Trade is expected to gain greater importance with opening up of foreign direct investment in multi-brand retail. The implementation of the Goods and Services Tax (GST) is expected to benefit the sector immensely by reducing the overall incidence of taxation. GST aims to reduce the cascading effect by replacing a multitude of indirect taxes such as central excise, service tax, VAT and inter-state sales tax with a single GST rate. Moreover, FMCG companies will be able to optimize logistics and distribution costs in the GST era. The resulting cost savings by the companies can be passed on to the final consumer thereby boosting demand. However the implementation of GST has currently been put on the backburner by the government.

Source: PWC and FICCI Private equity investments in India from 2005-12 Q1 in relation to benchmark indices Over the years, India has emerged as a preferred destination for Private Equity investments owing to its strong domestic growth, entrepreneurial ability and favorable demographics. It was the fastest-growing PE market in Asia in 2011. Interestingly, even as more domestic firms compete in the PE asset class, the bulk of new capital is coming from offshore funds. According to Bain & Company Inc. survey in 2011, almost 80% of funds will be sourced through foreign institutional investment, foreign direct investment and foreign venture capital investment. However, in the current year, private equity industry in India expects moderate growth of 10-25% primarily due to recent slowdown of economy and high inflation. Challenges in exiting investments and regulatory uncertainty in India are the other factors. As Mahendra Swarup,  President, Indian Private Equity and Venture Capital Association (IVCA) stated,  “For PE to realize its full potential, important regulatory hurdles like uncertainties in India’s tax regime and limited investment opportunities for foreign investors in several regulated sectors such as multi brand retail need to be addressed”. Thus, it is becoming imperative for PE funds in India to differentiate themselves, in their investment approach and portfolio management skills. Also, fund managers are getting more selective about where to park the money to ensure capital protection, better returns and appropriate liquidity. Infrastructure, consumer products, real estate in selective locations, healthcare, banking and financial services segment remain some of the most attractive sectors for PE investments as per the industry reports, along with continued interest in e-commerce in year 2012. 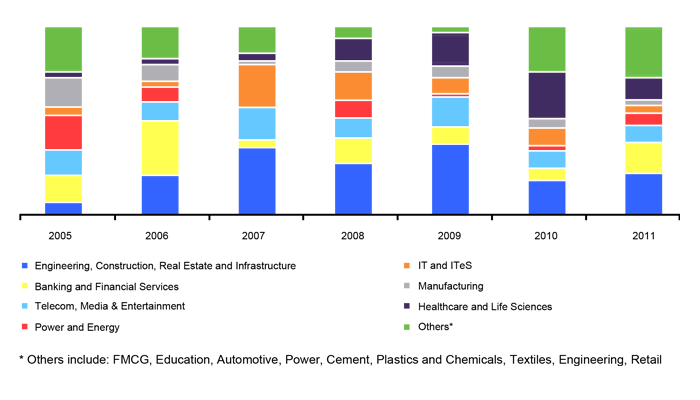